On a momentous day for Formula E that saw Edoardo Mortara (ROKiT Venturi Racing) win the 100th E-Prix of the world’s first electric motorsport world championship, Stoffel Vandoorne clinched the ABB Formula E World Championship drivers’ championship for himself and the teams’ crown Mercedes-EQ with a second-place finish on the temporary circuit in the South Korean capital of Seoul.

Vandoorne (pictured above) successfully navigated through a lap 1 melee in the second Hana Bank Seoul E-Prix of Formula E’s first venture into the South Korea and keep it clean throughout the rest of the race to bring the Silver Arrow 02 home in second place. Only Mitch Evans (Jaguar TCS Racing) had any chance of catching Vandoorne going into the race. But Vandoorne’s eighth podium of the season — more than any other driver — proved to be enough to secure his first drivers’ crown and hand Mercedes-EQ back-to-back drivers’ and teams’ titles on the German marque’s Formula E swansong.

“World champions; wow! It’s just the best feeling ever,” declared the Belgian Vandoorne. “Just look at the season we’ve had — the consistency and the car has been amazing, and the team has done an incredible job. I think every single one of us deserves it.  What we’ve accomplished is something special. Mitch has pushed me all the way along, the same with Edo — they were there all the time. It was really about the consistency in the end — they all have more wins than me, but I have the most podiums, I think.

“It was difficult to focus because the pace at the end was so high. I knew Jake had a five-second penalty, so I had to stay close enough to him to secure P2. It was an awesome day, a lot of concentration. I am drained after this year, it has been a lot of effort, the effort I have put in and the team has put in — it is incredible.”

Mortara controlled the race once he hit the front via a stunning dummy move in which he completed a successful switchback on polesitter da Costa (DS Techeetah) on lap 3. From there, he managed the gap and his usable energy perfectly to sign off his and Venturi’s campaign in style, the Monegasque squad taking second in the teams’ running ahead of DS Techeetah, and Mortara third in the drivers’ championship.

“Today was extremely positive. I still feel extremely frustrated because we didn’t manage to secure any points in the last two race weekends — I have so much frustration from that,” admitted Mortara. “But I am so thankful to the team for giving me such a strong car — we had a fantastic season and to finish like this is really what I needed and what we needed.

“We are normally better at racing than we are qualifiers, so I knew if I could manage to take the lead, we are normally pretty good at managing the races. From the front also helped us manage the temperatures, which were extremely hot. So yes, great day.”

The season finale also marks the end of the Gen2 era in Formula E, with the Gen3 race car debuting next season as the fast lightest, most powerful and efficient electric race car ever built.

The dawn of the Gen3 era in Season 9 will see Formula E go bigger and further than ever before with a provisional calendar featuring 18 races in 13 cities. The season begins on January 14 in Mexico City and continues in Diriyah, Hyderabad, Sao Paulo, Berlin, Monaco, Seoul, Jakarta, Rome and London. Three more E-Prix host cities will be announced later this year, while Hyderabad and Sao Paulo are both debut venues. 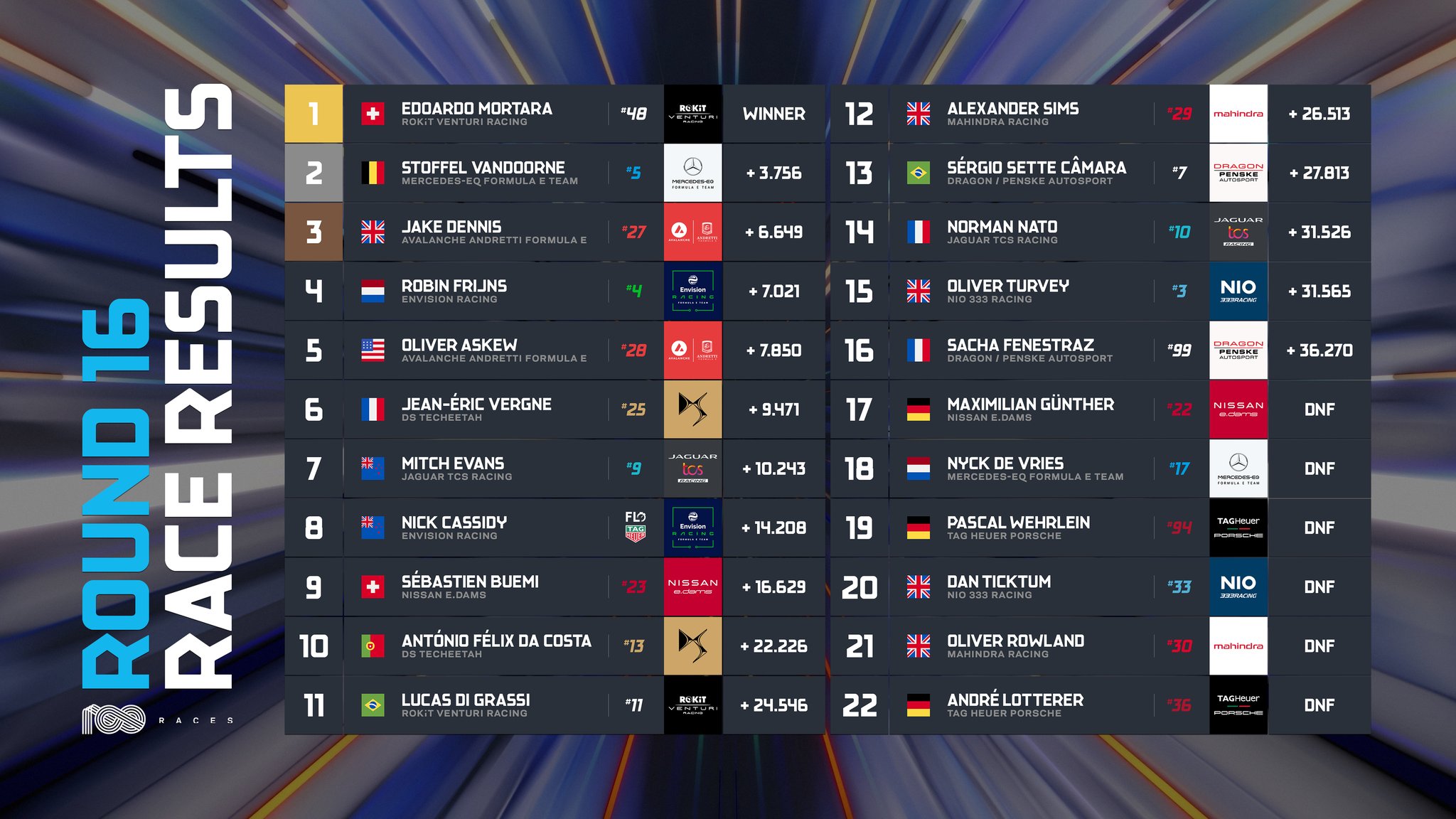 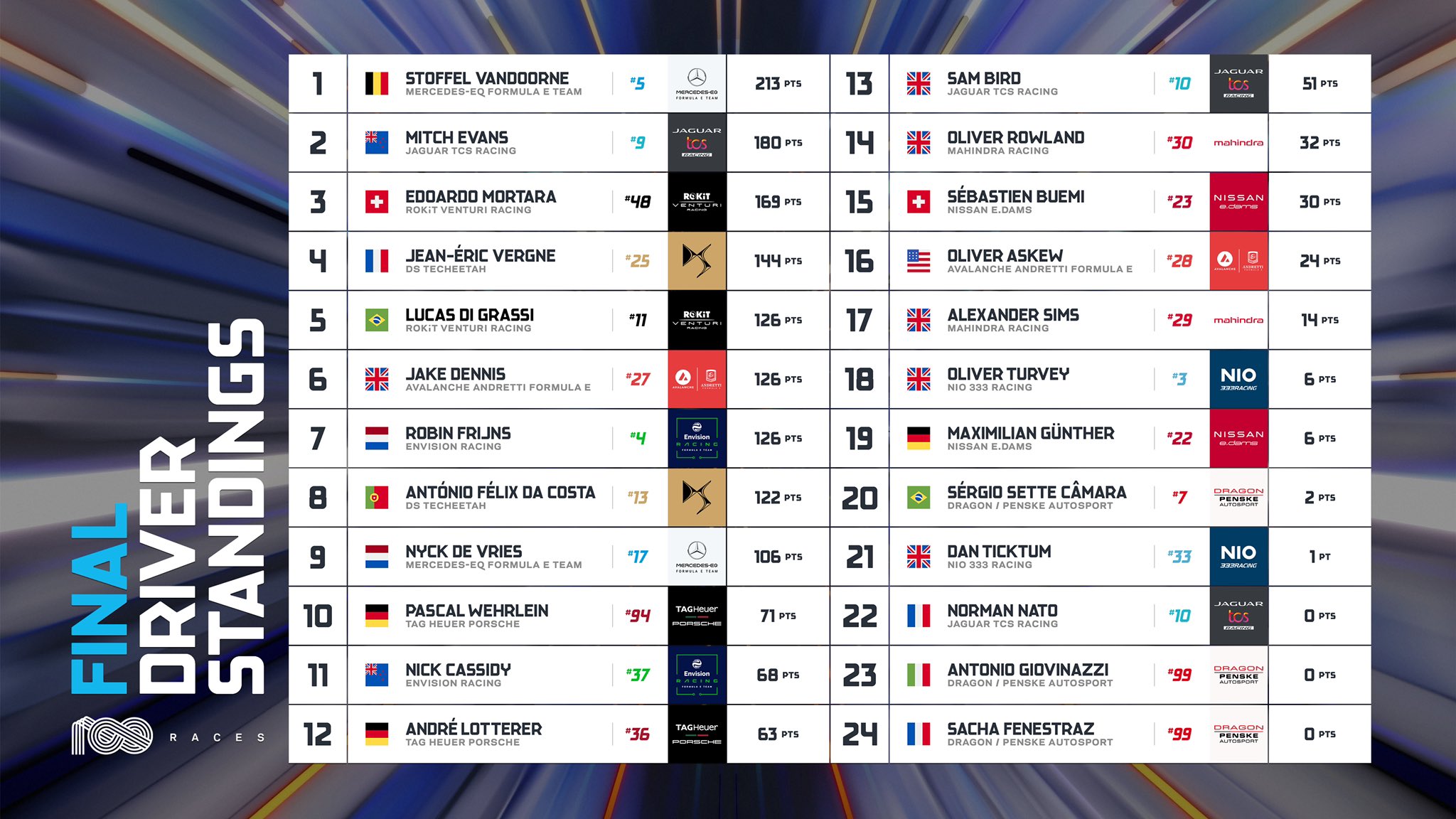