When Porsche tested its new GTP/LMDh car at Circuit de Catalunya near Barcelona, Spain, it did so with the utmost secrecy. However, there were a number of very interested parties watching quite closely. In the back of the as-yet-to-be-named prototype that will be raced in the IMSA WeatherTech SportsCar Championship and World Endurance Championship by Team Penske was the first example of the spec energy recovery system (ERS) unit that will be in all the cars in the new formula.

The ERS — basically the collection of components that, added to an internal combustion engine, form a mild hybrid system — consists of a Bosch motor generator unit (MGU), an Xtrac gearbox and batteries supplied by Williams Advanced Engineering, which also produces batteries for Formula E and Extreme E. Except for the batteries, which will reside in the cockpit, the entire system fits into the bell housing of the gearbox.

The four manufacturers expected to be on the GTP grid in 2023 each have an engine that they are mating to a chassis from their chosen partner, which could be Dallara, Multimatic, ORECA or Ligier. Acura is partnering with ORECA; BMW and Cadillac are using Dallara chassis; and Porsche’s is a Multimatic. So there is quite an array of possible engine and chassis combinations. The ERS has to work seamlessly with them all.

“You have quite a wide variety of combustion engines,” explains Martin Frohnmaier, director of Customer and Product Management for Bosch, which is coordinating the efforts of the three partner companies. “So we have to be very flexible and it was super challenging to fit the MGU, a motor, to the gearbox, but we did several iterations together with the chassis constructors. We found some solutions to integrate everything in the bell housing, which was challenging, but now we have we have a good connection and it’s working properly and the first test was quite successful.”

The bell housing design naturally fell to Xtrac, working with Bosch to fit the components inside, move electricity and fluid in and out, and taking into account the different engine and chassis configurations. To come up with an easily scalable solution for all the possible iterations, many of which aren’t yet known, is a massive task. Added to that is trying to do it with as few parts — and as few unique parts — as possible so that Xtrac can have all the spares it needs for the teams at the track.

“The bell housing designs are going to be quite different,” says Xtrac assistant vice president Paul Barton. “So it’s incredibly tight packaging, based on knowing what the back end of the engine is going to be, and where the axle line is. Trying to get an MGU in that space, working with Bosch hand in hand, we’re really proud of that work. Coupled with that, then you start thinking about high voltage lines, trying to move those out of the bell housing in a safe way that teams can service it. And then there are things not everyone considers with the different engines; we don’t know who’s coming to play long-term, so the engine could have the water system on the left-hand side or the right-hand side, so we made sure that we can adapt the MGU cooling for both in a common hybrid case.”

Making everything work together is a hybrid control unit (HCU) that interfaces with the batteries, the motor control unit, the MGU and the electronic brake system. The software for that is locked, as it is for the other components. But manufacturers and teams will have control over how the 40hp from the MGU is used in conjunction with the internal combustion engine.

“An LMDh manufacturer will command the hybrid system response through their ECU, but some aspects of hybrid operation are limited by the various hybrid control units and/or the LMDh Technical Regulations,” says Matt Kurdock, IMSA’s technical director. “The restrictions on the common hybrid hardware and control software are done as a measure of constraining development and operational costs for LMDh manufacturers and teams. It’s critical to the sustainability of the LMDh platform.

“LMDh manufacturers and teams will have control over regeneration and deployment strategies, using the control framework previously discussed. Management of the ESS state of charge is the responsibility of each team. Deployment and regeneration power limits defined in the LMDh Technical Regulations must be respected at all times. There are a variety of system operational parameters, such as temperature and voltage, that must always be respected during operation.”

In short, the hybrid system will provide another area of strategy for teams to work with, giving them options on how and when to use the extra power. And while that boost is small compared to the overall combined power limit of 671hp, reportedly the system is capable of delivering much more power should the sanctioning bodies see fit to release it.

Getting the components to work together seamlessly while fitting into a very tight, plug-and-play package has been a big undertaking requiring a lot of coordination between the suppliers. It’s also required a tremendous amount of cooperation between LMDh/GTP manufacturers, an area in which they have performed admirably, notes Bill Pearson, IMSA’s senior engineer for performance and simulation.

“I think the strength of what the ACO and IMSA have done is that they have built a framework where the manufacturers feel comfortable to work together to bring success to everybody,” he says. “We all know there’s going to be a point where they stop. We all know there’s going be a point where they’re on track racing, but I think they’ve realized that we all have the best interests of the sport at heart. We want to work together because without all the parts, it doesn’t work. Without all the people you can’t have a series. That’s whether it’s ACO, IMSA, all the guys at Bosch, Williams Advanced Engineering and Xtrac, all the constructors that built the chassis, all the people that are going to enter. We all need each other. You can’t win against yourself — that’s what Toyota are proving at the moment. I think that’s what is important as we’ve gone through this, is that we’ve really highlighted at all stages that if we have good governance in the project, right from the top, then people feel comfortable with working together to give everything that we need to get to get the series off the ground.” 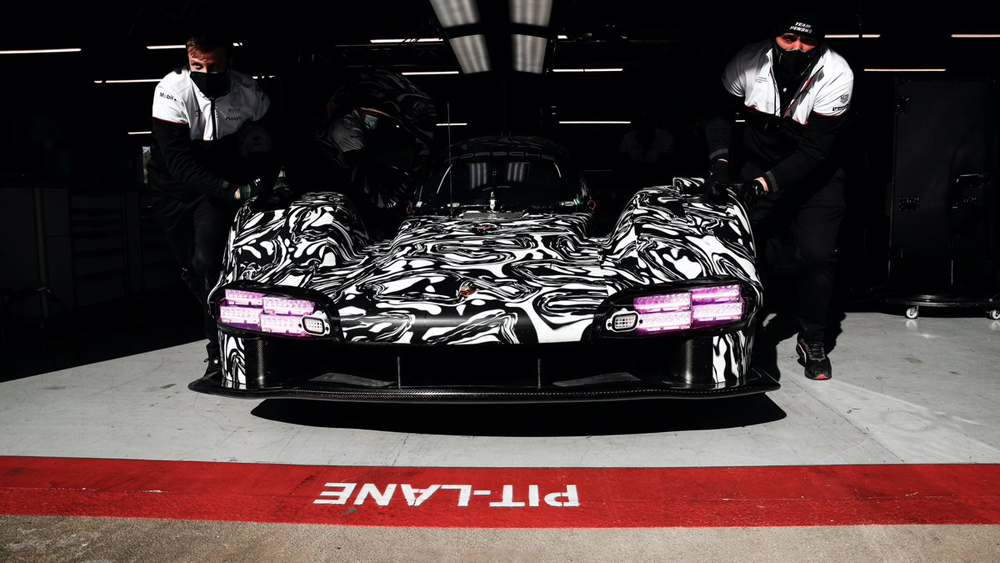 Pearson, along with ACO Competition director Thierry Bouvet, was present at the Barcelona test, and viewed it as a milestone moment in the development of the new GTP class.

“As an engineer, you don’t often get the chance to be at the start of something and then see it through to to the point where it actually runs on track. To actually see the car going around was fantastic,” he says “We dreamed up where it was going to go, how it was going to come together, what parts it was going to have, how the system was going to be configured … to see it all go and perform as expected was very, very satisfying indeed.”

Porsche has the early jump on the other GTP manufacturers; Acura, BMW and Cadillac are expected to begin testing this summer. There are other manufacturers rumored to be jumping in, such as Lamborghini, that probably won’t be seen in competition until 2024 at the soonest. IMSA will conduct some tests after the season, one immediately after Petit Le Mans in October, and a mandatory test for all GTP teams in December.

In addition to the ACO/IMSA LMDh platform, Le Mans Hypercars, a category created in collaboration with ACO and FIA, are eligible for GTP. That includes the existing and proven Toyota GR010 HYBRID and the forthcoming Peugeot 9X8 and Ferrari LMH car. Kurdock says that any LMH manufacturer wishing to compete in GTP in 2023 would have to notify IMSA by Sept. 1 and undergo wind tunnel testing at a facility in North Carolina that IMSA is using for LMDh homologations, as well as be present at the December test.