A NASCAR presence at last weekend’s Nitro Rallycross double header at Wild Horse Pass Motorsports Part in Phoenix was always expected, with Chase Elliott and Austin Cindric both returning to the series one week after the Cup series wrapped up 30 miles away.

But there was another familiar face in the paddock. Noah Gragson was on-site, but in the unfamiliar role of spotter for reigning series champion Travis Pastrana.

“Travis texted me Sunday, the day after we finished up our championship race last weekend,” he told RACER. “I was still here in Phoenix because I was probably going to go back to Vegas — that’s where my family’s from — and he texted me, ‘Hey, we’re racing Phoenix next week, do you want to come out and spot?’ I was like, ‘****, I’ve never really spotted before but I’d love to come out.’

“I saw Chase Elliot and [Austin] Cindric were out here running these races and I was like, ‘Yeah, I’ll try it; don’t expect a whole lot from me.’”

Of course, spotting is an integral part of NASCAR racing, so it’s not as if Gragson was unfamiliar with the concept, but it was a role reversal he’d never experienced before.

“I actually really enjoyed it, but I’ve never had the opportunity to spot, so with this being my first time, [and] learning about the series, it’s kind of cool seeing it from the spotter’s side and the fans side — just kind of taking the weekend all in.”

Ahead of his debut in the spotters tower, Gragson didn’t call up his own spotter, Tyler Monn, for notes, but instead relied on his own experiences and what he’d want to hear over the radio if he was the one behind the wheel.

“I kind of have been thinking all weekend, ‘Okay what would I want to hear from Tyler and how does he talk?’ And just taking my memory of how he sounds and his wording and stuff, and trying to implement it here with Travis,” Gragson said. “It’s been a little easier than if I was stepping in with someone else just because Travis is so talented, [and] on my first day on Friday we won everything. It was easy.

“We were out front; I was giving him his gaps out back. But Sunday’s heat races and whatnot were a little more challenging, just starting mid-pack and learning that — when to joker and when not to joker, giving him his gap… I was overwhelmed at first, but now I feel pretty comfortable.”

On Friday – when a full weekend’s worth of racing took place in a single day – the Pastrana/Gragson alliance was unstoppable. On track, Pastrana dominated qualifying, and converted that into an overall event win, becoming the first repeat winner of the series this year. 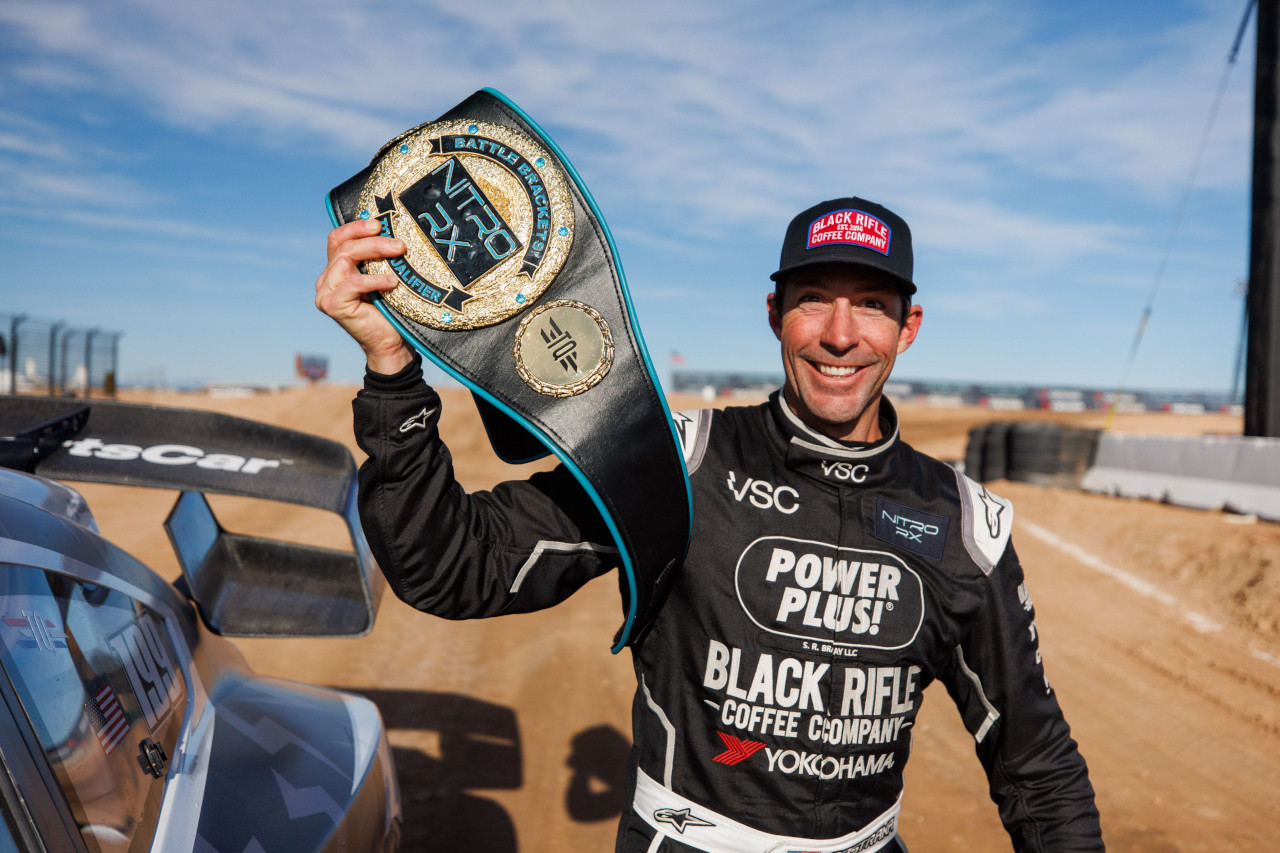 Jumping in at the deep end paid off for Gragson and Pastrana; utter domination on day one. Nitro Rallycross photo

The experience prompted some in the team, including Gragson, to wonder if he could stick around full-time.

“I thought about quitting Friday night!” he joked. “I told Travis, ‘You’re on your own now, I’m done, we’re undefeated, I can’t lose this undefeated streak as a spotter.’

“But it’s been good. It’s been cool to see his focus, and (he’s) really talented behind the wheel. In any form of motorsport, he just really excels and to see that passion that he has, to see that excitement, I think he gets the whole team fired up.”

With Nitro Rallycross’ season on hold until the new year and NASCAR currently in its off-season, Gragson’s attention now turns to his first full-time Cup campaign next year, where he’ll be racing the No. 42 for Petty GMS. Has his rallycross cameo given him anything he could take back to the world of stock car racing?

“Yeah definitely,” he said. “I can take a lot, learning and being on this side of things to even racing in NASCAR stuff and seeing it from a different perspective. Yeah, I think it’s good.

“I’m learning a lot; I can take a lot of valuable stuff from this weekend, even though it’s two different forms of motorsport.”

Driving in rallycross though, is a different matter, even if contemporaries Elliott and Cindric gave it a go.

“I feel like I’d be a weapon out there, just cartwheeling it down the front straightaway, flipping and I’d be out of my comfort zone for sure, but they’re so (incredible),” he said. “They’re a lot of fun to watch and it would be probably even more fun behind the wheel.”