The completion of the 2022 eNASCAR Coca-Cola iRacing Series signaled the end of another year of incremental progress for NASCAR’s officially sanctioned eSports series. New teams such as the Charlotte Phoenix utilized its eSports hub to host live events with its drivers in NASCAR’s backyard. In conjunction with Virginia State University, Richmond Raceway rebranded its team to Rise eSports, an example of NASCAR’s push to reach college campuses.

iRacing and NASCAR used its shared platform to design the Chicago Street Course, sending the eNASCAR Coca-Cola Series to the track for this year’s All-Star event. Meanwhile, some longtime series stalwarts such as Logan Clampitt and Blake Reynolds announced that this season would be their last.

Perhaps the biggest milestone of the season took place in front of Glory Road at the NASCAR Hall of Fame, with its 18 premier series championship-winning cars. The selection of cars, from Herb Thomas’ 1951 Hudson Hornet to Jimmie Johnson’s 2016 Chevrolet SS, was handpicked by Dale Earnhardt Jr.

Sat in front of Glory Road were the four competitors vying for the 2022 eNASCAR Coca-Cola iRacing Series championship. With an average age of just 22 years old, Graham Bowlin, Casey Kirwan, Steven Wilson, and Bobby Zalenski were seeking to become the first person to hoist the Dale Earnhardt Jr. trophy.

In many ways, Earnhardt Jr. has served as the bridge between the historic vehicles he selected for Glory Road and the hi-tech simulators beneath them. It was Earnhardt Jr. who won the first race of what became the eNASCAR Coca-Cola iRacing Series. He led the charge to restore North Wilkesboro and allow it to be scanned and recreated in iRacing, the company where he serves as an executive director.

On Tuesday night’s broadcast, Earnhardt Jr. joked about the times when the phone bill came back to his home with exuberant charges for connections to Massachusetts, where the servers for iRacing’s direct predecessor were located.

At the end of the evening, it was Earnhardt Jr. who presented the trophy to the eventual champion, Casey Kirwan. The trophy weighs an estimated 60 pounds and is modeled after the NASCAR Winston Cup trophy.

“It was really cool,” Kirwan said of Earnhardt Jr. presenting the trophy. “It was also awesome before the race even started Dale came up to all of us and chatted for a bit. He came up to me and talked about the stream and everything like that. It was cool for him to be there and come support it.

“Of course the trophy is really nice, he did a really good job on it. To have his name on it is cool and even after he stuck around, and we chatted with him. He took me and Rajah Caruth up on Glory Road and checked out one of his dad’s old cars, one of Richard Petty’s old cars. He even got me to hop into one of Petty’s old cars at one point which was cool. It was just cool to hang out and talk sim-racing and the event and everything.” 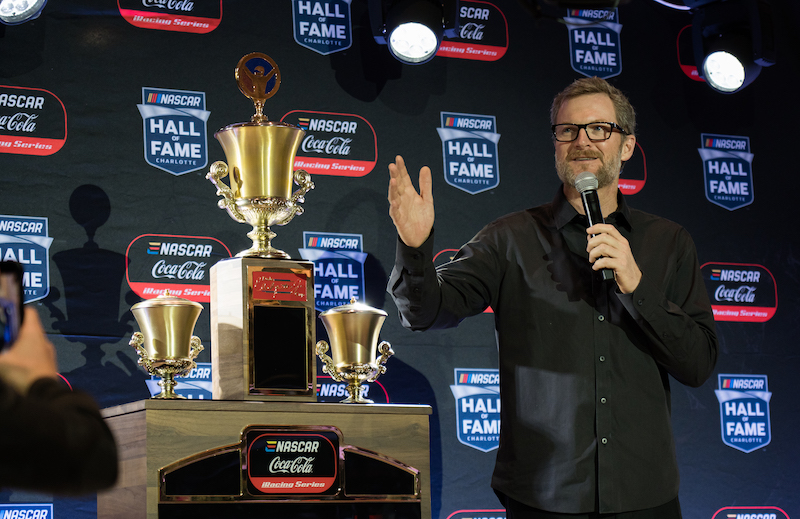 In addition to the trophy, Kirwan will also take home the $100,000 prize. He has no plans for the money just yet, but he did say his spotter, crew chief, and others who supported him will be getting a cut of the winnings.

“We’re the ones that get to race for the 100 grand, but they put in just as much time,” Kirwan said. “I talk about it all the time, I’m not a setup guy. In the past two weeks, which is the most I’ve tested in my entire life, I never once clicked on the chassis page (in the setup menu). They did the adjustments, they’re like, ‘here it is, try this,’ I drive it, that’s it. My brain is just good at driving, that’s all I need.”

All four drivers had their sim-racing rigs shipped from their homes to the NASCAR Hall of Fame. Zalenski, from California, Wilson, from Iowa, and Bowlin from Houston, each flew to Charlotte, while Kirwan was able to stay at home in the nearby suburb of Matthews, North Carolina. All four drivers had equal time – about three hours – to acclimatize themselves to the environment in the NASCAR Hall of Fame.

According to Kirwan, sitting in the same chair, in front of the same monitors, and at the same steering wheel you do at home but in a completely different environment was a strange experience. Many things were similar but the occasional movement of people in the background, or in the case of the final laps, the broadcast cameras that fixated on him, were sometimes distracting.

“With like three laps to go, all the cameras start rolling up to my right and I see that a little bit and I was like, ‘don’t jinx it, please don’t get a yellow now,’” Kirwan joked.

After crossing the line, Kirwan’s father, John, joined him on stage to share an embrace.

“That was cool to have him there, a bunch of friends and family were there, and to go down and see all of them was awesome. That’s kind of another benefit… of being local is to have everyone here so a bunch of people were able to come and that was cool,” Kirwan said.

“That’s part of the reason that made the live event even better. If I’m at home, I still have my dad, but I don’t have everyone else to celebrate with. Just to have a whole room to celebrate with was really cool.”

When the official celebrations and photographs were done, Kirwan had one more wish. Upstairs at the NASCAR Hall of Fame sits a life-size model of Lightning McQueen from the movie “Cars”. Kirwan was six years old when the movie came out and played a large part in developing his passion for NASCAR.

“The Cars movie was always my favorite movie,” Kirwan said. “I still just watch it a million times to this day if I ever get bored and need to turn something on. Right when the movie came out was right when I was getting into NASCAR so I’ve just kind of grown up with it.”

When it came time to pick his number for the 2022 season, Kirwan opted for Lightning McQueen’s No. 95. Beside him at his sim-racing rig when he won the title was a miniature model of Lightning McQueen. 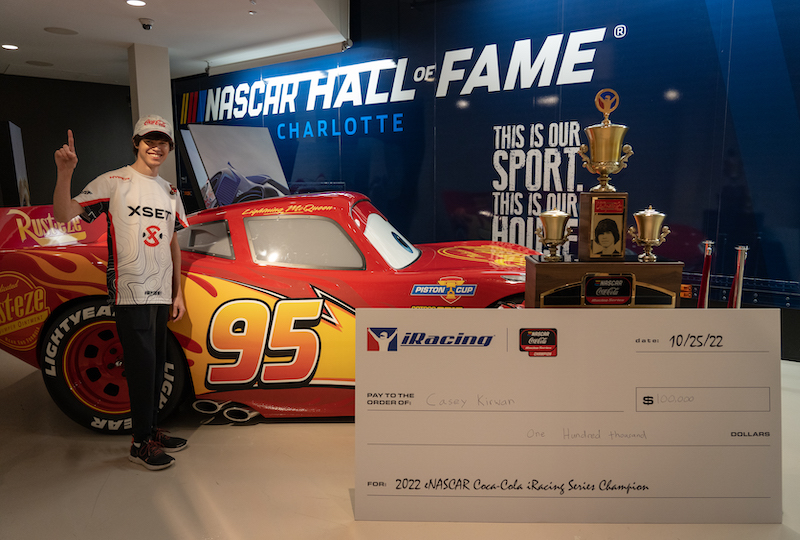 “I had the realization when I was talking to Dale Earnhardt Jr. and I was mid-thought and I just turn and I was like, ‘where’s the Hall of Fame person? We need to go upstairs with the trophy, we need to go to Lightning McQueen,’ so that was probably the most ‘out of the ordinary thing’; it was wild all around,” Kirwan said.

Once the photos were taken, the process of tearing down and packing up all the equipment began. Kirwan and his dad made it back home just before 2 am. By Wednesday afternoon all of the equipment had been set back up inside Kirwans’ home. The shelf that once housed a steering wheel and a Lego McLaren F1 car, however, had been replaced with the Dale Earnhardt Jr. trophy and the ceremonial check.