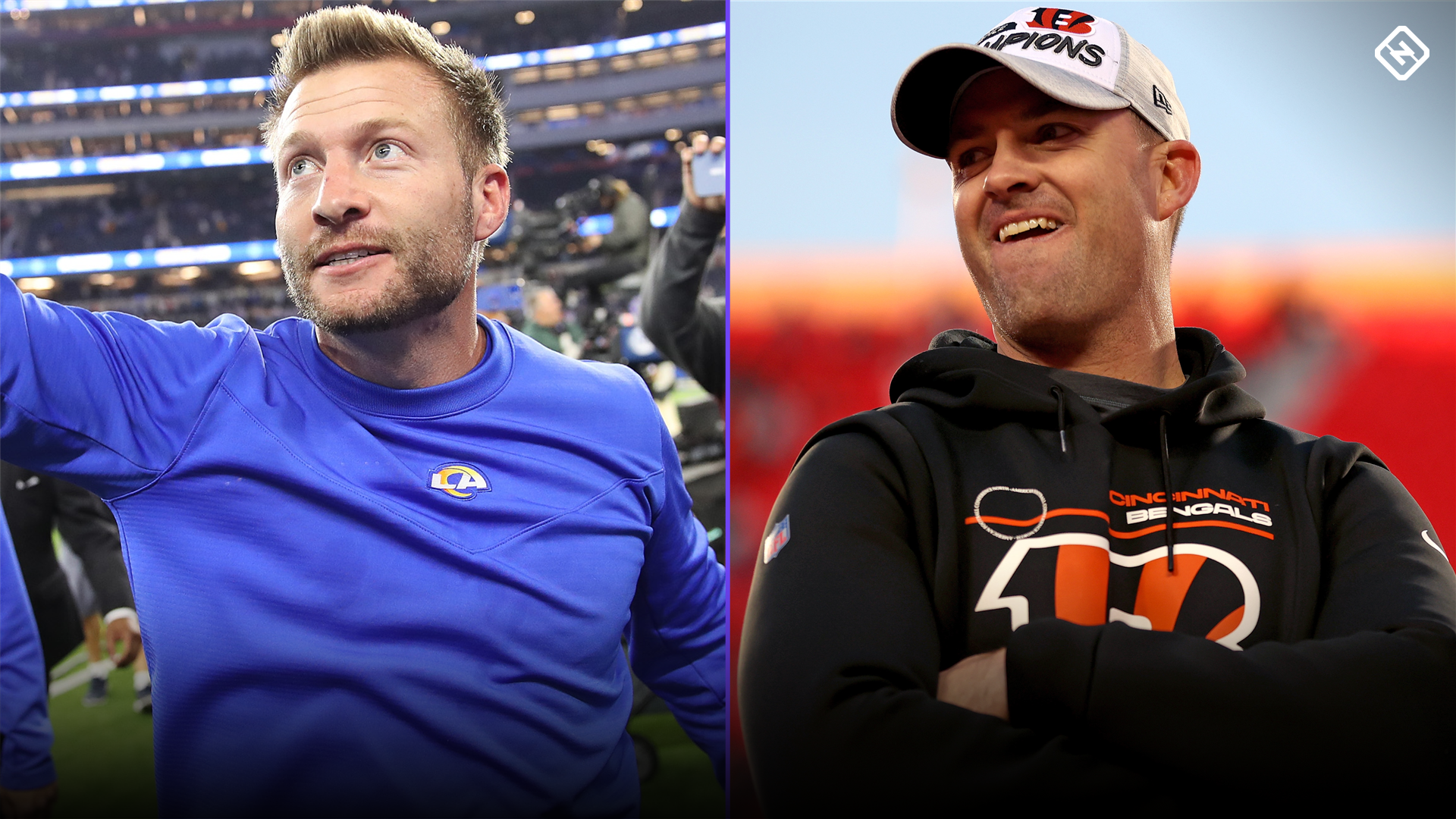 The Bengals and Rams may not play one another very often, but there is a lot of familiarity between the two sides heading into Super Bowl 56.

Why? Because Sean McVay and Zac Taylor used to work together.

Taylor spent two years as a part of the Rams’ coaching staff under McVay. He served as the team’s assistant wide receivers coach in 2017 and quarterbacks coach in 2018 before the Bengals hired him to turn around their team.

Three years later, the two young coaches are meeting in the 2022 Super Bowl. And their connection to one another will be on full display.

What have the two coaches said about working with one another? Here’s everything to know about the McVay-Taylor connection before they meet in the biggest matchup of their lives at Super Bowl 56.

What Zac Taylor has said about Sean McVay

Taylor has been appreciative of McVay when asked about his time with the Rams. He explained that McVay helped him to build up self-confidence when they worked together, and that’s part of why McVay’s coaching tree has been so successful.

“I think the joke is if you had a cup of coffee with Sean McVay, then you’re going to be a head coach in the NFL,” Taylor said at his first Super Bowl week news conference, per the Associated Press. “And there’s a ton of truth to that. Because if you spend time around the guy, he gives you a ton of confidence in yourself.”

Additionally, Taylor praised McVay’s outside-the-box approach to coaching. Instead of mimicking what other NFL coaches do, Taylor says McVay approaches thing in his own way.

Per Taylor, that means being very open with his assistants to help them learn and improve. And he believes that helped set him up for eventual success in Cincinnati.

“He’s really shown a lot of young guys that you can do it in your own way,” Taylor said. “It doesn’t have to be the way it’s always been done for the last 20 years around the league. There can be a different way of doing things, and so I think that we all saw that from Sean. He was very open about how he did things, why he made certain decisions.

“And so that has allowed myself and a lot of other guys to go off and feel very comfortable leading a team because of the impact he made on all of us.”

What Sean McVay has said about Zac Taylor

However, despite their lack of familiarity, McVay took a liking to Taylor. That’s part of why he made Taylor his quarterbacks coach in his second year with the team in 2018. That served as a launching pad for Taylor’s coaching career.

McVay, 35, has had nothing but good things to say about Taylor, especially in recent weeks. Before the AFC and NFC championship games, McVay complimented the way that Taylor’s Bengals were playing, noting that Taylor’s “swagger and confidence” were clearly motivating his players.

“I love Zac Taylor, I’m so happy for him,” McVay said, per the Cincinnati Enquirer. “I think that team plays with a swagger and confidence similar to the way Zac carries himself. He’s so steady, he’s always so neutral. You look at the way (Joe) Burrow plays, he never flinches, he’s always confident in his ability to respond and I think they thrive off that.”

McVay’s praise continued after both the Bengals and Rams advanced to the Super Bowl. The Rams coach was asked about his former assistant during his postgame news conference and credited his team for finishing an 18-point come-from-behind win against the Chiefs.

“I know what a great coach he is,” McVay said of Taylor. “[The Bengals] have done a great job this year.”

“You look at the start of that game — I think they’re a great resilient team. It didn’t look good for them,” McVay added. “And they’ve just continued to show why they’re mentally tough outfit. I think that’s reflected by their head coach.”

Despite being the youngest coach in the NFL, McVay already has a pretty extensive coaching tree across the NFL. The Rams have generated three NFL head coaches since McVay came to the team with a fourth one soon to follow.

Soon, Kevin O’Connell will join those ranks. The Rams’ offensive coordinator is expected to be named the next coach of the Vikings after Super Bowl 56. He has been with the Rams for two seasons.

Despite McVay’s success churning out solid NFL coaches, he prefers to credit the hard work of his assistants instead of himself.

“I almost think it’s a little ridiculous when you talk about the tree because these guys are co-workers where we positively pour into one another,” McVay said in early February, per SI.com. “I just happen to be in the role that I’m in, but whether it’s Kevin, Brandon Staley, Zac Taylor, Matt LaFleur, I learned more from them than those guys have from me.”

That said, McVay does have a method for getting the most out of his coaches. He tries to build a “positive environment” in which they can all operate and execute their game plan.

“I think it is important to be intentional about identifying the greatest coaches that you can, to be able to have a positive environment where we’re pushing each other in the right way,” McVay said. “But you want to be around ambitious people.”

That certainly lines up with what Taylor said about McVay instilling confidence in his employees.

McVay also spoke about the importance of diversifying his staff to ensure that they are getting fresh ideas into the rotation. That’s why he targets coaches “from all different types of backgrounds” when looking to fill the roles vacated by his departed assistants.

McVay’s approach certainly seems to lend itself well to having a successful coaching tree. It will be interesting to see which Rams coach becomes the next hot coaching candidate come 2023.