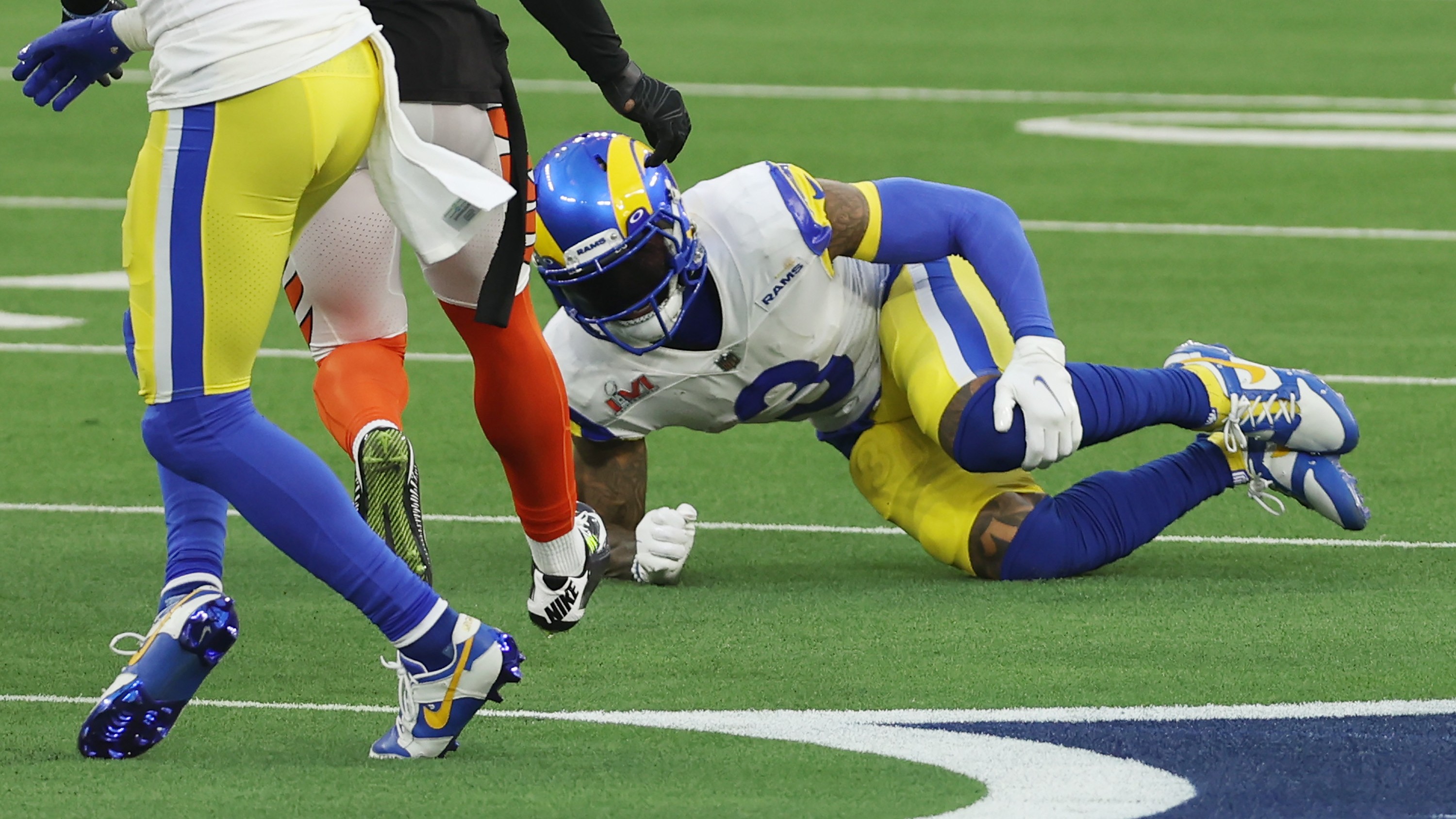 The Rams escaped the first half of Super Bowl 56 with a 13-10 advantage, but they suffered a major blow to their offense.

Odell Beckham Jr. went down with a non-contact injury to his left knee after dropping a short pass. He remained down on the field for a couple of minutes before walking off with some assistance from the Rams’ medical staff.

Beckham was deemed questionable to return from the injury, which occurred with 3:54 remaining in the first half.

The injury is another addition to the laundry list of maladies that Beckham has endured during his career. Below is a run-down of the injuries that he has dealt with and missed time because of during his pro and college careers.

Beckham has dealt with numerous injuries during his NFL career. Many of them have been in his left leg, which is the one that he hurt during the Super Bowl against the Bengals.

Below is a recap of all the maladies that Beckham has dealt with since his college days.

— November 2012. Beckham suffered a hip injury during LSU’s final regular-season game and missed the second half as a result of it. He was able to return for the team’s bowl game, so he didn’t miss any full games that season.

— June 2014. During his spring camp with the Giants, Beckham suffered a hamstring injury. He managed to participate in training camp despite the problem, but it eventually caused him to miss time.

— August 2014. Beckham’s June hamstring injury lingered and eventually, he aggravated it during training camp. He missed the preseason and the Giants’ first four games of the season before he was able to make his NFL debut.

— November 2016. Beckham stayed relatively clean over the next two seasons — minus a couple of minor in-game knocks that didn’t cause him to miss time — before he suffered a thumb injury late in the 2016 season. He was able to play through the injury but it required maintenance.

— August 2017. Beckham suffers a sprained ankle during the preseason. He missed the final two preseason games and the Giants’ first regular-season game due to the injury, which was in his left leg.

— October 2017. Beckham suffered another injury to his left ankle. This one was a season-ending fracture that caused him to miss the final 11 games of the season. He played in just four games in 2017, the fewest total of his career.

— November 2018. In Week 12 of the 2018 season, Beckham suffered a quad bruise against the Eagles. He played the next week but ended up missing the final four games of the season, his last in New York, because of the injury.

IYER: Is Matthew Stafford a Hall of Famer?

— October 2019. Beckham was listed on the Browns’ injury report frequently because of a groin injury, but he didn’t miss a contest.

— January 2020. After the 2019 season, Beckham had surgery to repair a core muscle injury. That explained his presence on the injury report during the campaign.

— October 2020. Beckham dealt with a toe injury before Week 4 but was able to play through it. However, in Week 8, he suffered a torn ACL in his oft-injured left leg. He missed the final nine games of the season because of the injury.

— October 2021. Beckham suffered an AC joint sprain against the Cardinals. He played through the injury for the next two games, his final two with the Browns.

— November 2021. Beckham was diagnosed with a hip injury after the Rams’ loss to the Packers. He didn’t miss any time as a result of the injury.

— February 2022. During Super Bowl 56, Beckham suffered a non-contact injury to his left knee. He was helped off the field and deemed questionable to return.